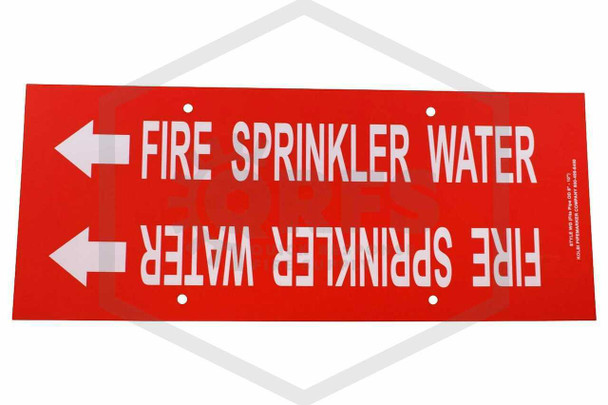 This wrap-around pipe marker installs on 8in. to 10in. fire sprinkler system pipes to indicate the direction of flow and pipe contents. When installing a plumbing system, standards from the American National Standards Institute (ANSI) and the American Society of Mechanical Engineers (ANSI) recommend that all piping to be labeled according to the type of piping system, the contents of the pipes, and in which direction the contents of the pipes are flowing.

This particular pipe marker features 2 1/2in. white letters that read 'SPRINKLER WATER' over an 24in. red background. It is constructed using semi-rigid vinyl, secured to 8in. to 10in. pipes with two included zip-ties, and will withstand temperatures between -40F (4C) and 180F (82C).

Where do I place this marker?

For pipe markers to be effective, they must be placed in locations where the information provided on the label would be needed. Pipe labels should always include the contents found inside the pipes, and the direction the contents are flowing. The Wrap Around 'SPRINKLER WATER' Pipe Marker will tell technicians, firefighters, inspectors, and anyone working with the fire sprinkler system in which direction the water is flowing.

The following are locations within a piping system where these 'SPRINKLER WATER' markers should be affixed to pipes between 8in. and 10in. in size:

Will this marker fit my pipe?

The WA style of the wrap-around 'SPRINKLER WATER' pipe marker is accompanied by two red zip-ties that will attach the label to any pipe with an outer diameter of 8in. to 10in.. Note that a pipe's outside diameter is almost always larger than the pipe's nominal size or trade name.The outer diameter of a pipe may be a quarter-inch, half-inch, or three-quarters of an inch larger than the nominal size.

How do I apply this marker to my pipe?

The wrap-around 'SPRINKLER WATER' pipe marker for 8in. to 10in. pipes is accompanied by two red zip-ties that will fit the specified pipe sizing. Use these ties, and follow the steps below to attach the pipe label correctly.

MSRP:
$133.75
1 in. OS&Y Gate Valve controls the flow of water in plumbing and fire protection systems, including fire sprinkler and standpipe systems. This outside screw and yoke/outside stem and yoke valve is...
Add to Cart

MSRP:
$0.74
1 in. (25.4 mm) Globe Pipe Hanger Swivel Ring is designed for the suspension of non-insulated stationary pipelines in fire sprinkler systems, standpipes, plumbing, and other piping applications. This...
Add to Cart

Residential Riser | Threaded with Ball Valve and Pressure Relief | 1 in.

MSRP:
$392.75
1 in. (25.4 mm) Threaded Residential Riser with Ball Valve & Pressure Relief is a pre-assembled, pressure tested, and UL-approved riser kit. Ready for installation right out of the box, this...
Add to Cart