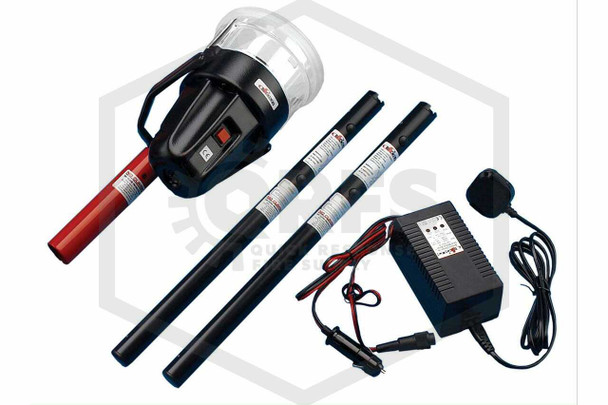 This heat detector accessory is designed to test heat detectors of almost any size. With a pivoting handle, little weight (2.4 pounds per head and battery), and a 4 in. diameter opening, this tool is easy to use and eliminates the need for ladders or scaffolding.

Is this a standalone tool?

No. The Solo 461 requires a Solo-brand extension pole.Depending on the attachments used, this tool can grasp detectors at distances of 14 to 30 feet. Available extension poles include:

How does this cordless heat detector head work?

Solo 461 heats detectors with Cross Air Technology. The head creates a low-energy beam of heated air that blows horizontally, allowing it to quickly enter openings in the sensor. Cross Air Technology is designed to reduce the time spent testing and extend battery life all while minimizing potential damage to the detector.

This detector activates when an object enters the head, breaking an invisible infrared (IR) beam. Electronics inside the cup also promote safer and faster inspections by:

The Solo 720 (battery) and Solo 725 (charger) promote continuous testing. Each battery provides about 50 tests of 30 seconds and recharges in roughly one hour.

To test a heat detector:

MSRP:
$300.99
Solo 610 Compartmentalized Carrying Case for Extension Poles, Testing Heads, and More The Solo 610 is the ultimate carrying solution for fire alarm technicians who rely on Solo's brand of detector...
Add to Cart

MSRP:
$124.75
This model wrench is for the new XT1 frames that have a square frame. For old XT1 sprinkler with round frames, please see part number VKOESW0. This open-ended sprinkler wrench features a single head...
Options

MSRP:
$1,236.75
Smoke Centurion Smoke Detector Testers spray synthetic smoke ideal for functional tests of smoke detectors‚ and the SOLO 809 Tester Kit comes with all the accessories that make these tests...
Add to Cart