Our website captures some information about you automatically utilizing background local storage and session storage technologies ("Cookies") in order to improve the user experience. Cookies are small files or other pieces of data which are downloaded or stored on your computer or other device, that can be tied to information about your use of the website (including certain third party services and features offered as part of our website). Examples of information of this type are your IP address, the browser you are using, the operating system you are using, the pages on the website that you visit and details of your transaction activity, such as the amount, date and time for each transaction. When we use Cookies, we may use "session" Cookies that last until you close your browser or "persistent" cookies that last until you or your browser delete them. You may change your browser setting to decline the use of Cookies.

Pixel tags or clear GIFs, also known as web beacons, are transparent graphical images placed on a website. We use these items on our Site to permit us, for example, to count users who have visited those pages or opened an email and for other related website statistics (for example, recording the popularity of certain website content and verifying system and server integrity).

We may use third-party companies to help us tailor content to users or to serve ads or messages on our behalf. These companies may employ cookies and web beacons to measure advertising or messaging effectiveness (such as which web pages are visited, which messages are responded to, or what products are purchased and in what amount).

We use Google Analytics, a web analytics service of Google Inc. ("Google") which uses cookies to identify the frequency of use of certain areas of our website and to identify preferences. The information regarding your use of this website that is generated by the Cookie (including your truncated IP address) is transferred to a Google server in the United States and stored there. Google will use this information to analyze your use of the website, compile reports on activity for us, and perform further services associated with website use and Internet use. Google may also transmit this information to third parties where required by law or to the extent that third parties process these data on behalf of Google. You can deactivate Google Analytics using a browser add-on if you do not wish the analysis to take place. You can download the add-on here: www.tools.google.com/dlpage/gaoptout. 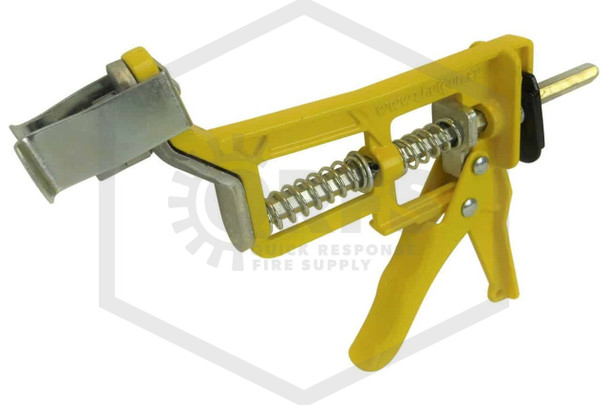 Shutgun's design allows for the closure of a wide range of sprinklers, including institutional fire sprinklers. Without a fire sprinkler stopper, sprinkler discharge can only be stopped at the main valve or a local shutoff valve. Fire code may require personnel to patrol the building or even evacuate until the broken head is replaced.

Institutional Shutgun stops water damage caused by accidental fire sprinkler discharge: vandalism, human error, and industrial accidents can lead to mold, mildew, damaged carpets, and a host of other expensive issues. This fire sprinkler shutoff device is a must-have tool for contractors, movers, painters, cleaners, and anybody who works in close proximity to fire sprinklers.

1) Place the probe of the Shutgun in the opening of the sprinkler head.

2) Squeeze the Shutgun handles to spread jaws apart. Once the Shutgun jaws are opened fully, they should hold-open the institutional head's activation mechanism plugging the water source. This may require the handles of the Shutgun to be squeezed multiple times.

Specifications
Reviews
No reviews yet

MSRP:
$149.99
SprinklerVac: The Premier Fire Sprinkler Vacuum Attachment Transforms an ordinary vacuum into a safe and effective sprinkler cleaning tool Compatible with most household and commercial hoses...
Add to Cart

MSRP:
$2.75
12 in. x 4 in. Fire Extinguisher Vertical Arrow Decal provides a high-visibility indication of a fire extinguisher's location. In accordance with NFPA 10 and OSHA regulations, fire extinguishers in...
Add to Cart
Address building fire protection system issues before they are cited. Learn how by subscribing to the QRFS Newsletter.
This is required field.
This is required field.