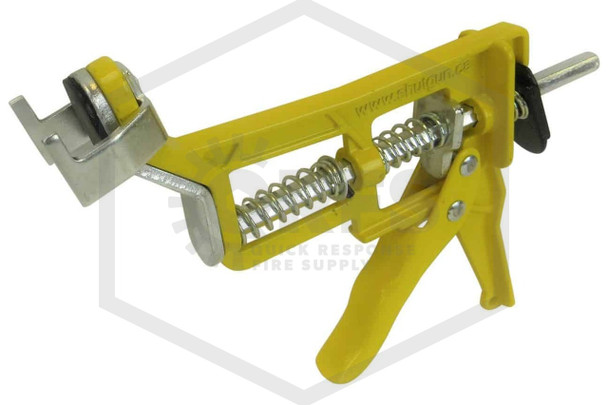 Shutgun's design allows for the closure of a wide range of sprinklers, including sheared heads on semi-recessed, pendent, horizontal sidewall, & upright fire sprinklers. Without a fire sprinkler stopper, sprinkler discharge can only be stopped at the main valve or a local shutoff valve. Fire code may require personnel to patrol the building or even evacuate until the broken head is replaced.

Sheared Head Shutgun stops water damage caused by accidental fire sprinkler discharge: vandalism, human error, and industrial accidents can lead to mold, mildew, damaged carpets, and a host of other expensive issues. This fire sprinkler shutoff device is a must-have tool for contractors, movers, painters, cleaners, and anybody who works in close proximity to fire sprinklers.

1) Place the jaws of the Shutgun in the opening of the sprinkler head.

2) Squeeze the Shutgun handles to spread jaws apart. Once the Shutgun jaws are opened fully, they should fit tightly between the deflector and the water source. This may require the handles of the Shutgun to be squeezed multiple times.