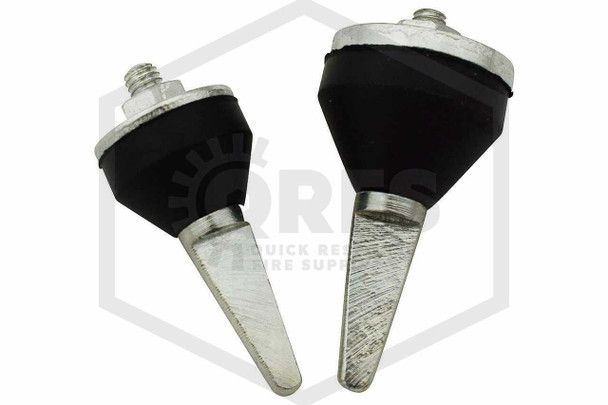 Fire sprinkler tools like the concealed head Shutgun provide consumers with a cost-effective way to stop accidental discharge from sprinkler heads. These replacement probes allow an existing concealed head Shutgun to be used with either 1/2 in. (12.7 mm) or 3/4 in. (19.1 mm) NPT concealed or recessed fire sprinkler heads. Crafted using cast aluminum and rubber and manufactured Technicraft, the creators of the official Shutgun, these attachments are simple to install and even easier to use.

What is a concealed head Shutgun?

The Concealed Head Shutgun features extended probes that are long enough to reach inside the opening of a concealed or recessed sprinkler in a wall or ceiling, helping users stop an activated sprinkler head quickly.

Shutgun's design allows for the closure of a wide range of sprinklers, including concealed pendent fire sprinklers. Without a fire sprinkler stopper, sprinkler discharge can only be stopped at the main valve or a local shutoff valve. Fire code may require personnel to patrol the building or even evacuate until the broken head is replaced.

The concealed head Shutgun stops water damage caused by accidental fire sprinkler discharge: vandalism, human error, and industrial accidents can lead to mold, mildew, damaged carpets, and a host of other expensive issues. This fire sprinkler shutoff device is a must-have tool for condos, hotels, office buildings, and anyone who works in close proximity to fire sprinklers.

How do I apply the attachment?

To apply this attachment piece to the Shutgun sprinkler stopper:

Which Shutgun is right for me?

Shutgun sprinkler tools and attachments are available for a range of fire sprinkler systems. Models available from QRFS include: